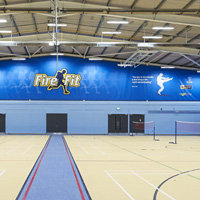 Remind yourself of the rules and how we format our leagues with this useful printable rules guide.
find out more

10 reasons you will love playing in our Netball Liverpool Leagues