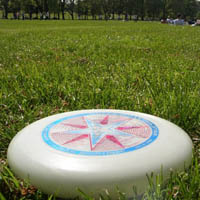 TEAM SIZE
7 players are allowed on the field at any one time
At least 3 females on the pitch at all times.
A team can play a legal game with 6 players, with 2 females.
Teams may have as many players in their squad as they want.

SUBSTITUTIONS
Unlimited substitutions can only be made between points unless in the case of an injury.

TIME
A game is played in two, 18 minute halves separated by a short half time. The
referee maintains a running clock throughout each half. The clock will only be
stopped for injuries.

PITCH
The pitch is broken up in to 3 areas. At each end is the scoring area known as the
“End Zone”. In between the “End Zones” is the main playing area.

RULES
Play starts and restarts with a “Pull”. A “Pull” is a long throw that is performed by the defending team, in an effort to push the receiving team as far back as possible. A dropped “Pull” is a turnover and results in a change of possession. If the “Pull” goes out of bounds, play begins from where the frisbee went out (similar to a throw-in in football). If the “Pull” rolls out the back or side of the “End Zone”, play resumes from the nearest point on the front line of the “End Zone” to where the disc went out.

A point is scored by catching the frisbee in the “End Zone” your team is attacking.Teams change ends after every score and play is restarted with a “Pull” when everyone is lined up within their defending “End Zone”.

Change of possession occurs for the following reasons:

– a pass has missed it’s intended target, and falls to the ground

– a pass is dropped

– a pass is deflected in mid flight by a defender, causing it to hit the ground

– a pass is intercepted

– a pass is not made before the “Stall” has been completed

The change of possession will occur at where the frisbee has touched the ground, been intercepted, gone out of bounds or where the “Stall” took place.

FOULS
A foul is the result of contact between players. Incidental contact between playersdoes not constitute a foul. If a foul causes a drop or interception, play continues as if the pass had been completed. Violations of the rules DO NOT result in a change of possession, but instead, the frisbee is returned to the player in violation of the rules/violated against to continue from the spot where the violation occurred. Violations include moving with the frisbee, double teaming at the “Stall” and “Picks” – moving in a manner so as to obstruct the movement of any player on the defending team.

FORFEITS
If your team forfeits a match during the season, the following rules apply:
1st Offense: Loss of game and warning issued.
2nd Offense: Loss of game and staff reserves the right to remove team from playoffs.
If you know in advance that your team is going to forfeit a game, we encourage you to call our office so as to help us schedule your opponent a game. Teams have until ten minutes past the designated start time to field a full squad (minimum 2 females). If at that time one team is unable to field a full team, it will be up to the staff and the opposing captain to determine what is allowable. They have the choice of making the team play short handed or forcing a forfeit. We always strongly encourage the former, and look to play a game in all circumstances.

STANDINGS
The updated standings will be posted weekly, displaying each teams rank within its skill level.

PLAYOFFS
All eligible teams make the playoffs (teams that have not abused any policies are eligible). In certain situations teams at or near the bottom of the standings may not advance to the playoffs. Check with GO MAMMOTH league coordinator to see if this applies to your league. Playoffs are single elimination. Ringers used during play offs/finals must be agreed by both sides before the games begin- if a team does not permit another team to use ringers they will have to play short-handed. Teams may play more than one match per day. Any questions regarding policies, rules, or eligibility must be addressed before the start of the match.

WAIVERS
In order to participate in the league, each participant must sign the team waiver.Waivers are provided and must be completed and handed in no later than the first night of play. Players not present the first week of play will still be required to sign a waiver with our staff before participating.

SPORTSMANSHIP
The idea of GO MAMMOTH is to have fun. We hope that all participants keep that in mind when becoming involved. Although the games may become intense, you still can be competitive while maintaining good sportsmanship. With this said, any behaviour deemed unacceptable by staff may result in suspension and/or ejection from a game or the league.

STAFF
To coordinate and run the league, our refs and/or staff will be available at all times to help the league run as smoothly as possible. If you have questions regarding schedules, policies, rule interpretations, directions to the bar, etc. please ask.

1 All equipment provided – No need to bring anything to the pitch, we’ll provide you with everything you need to play in our ultimate frisbee leagues!

3 Top-notch venues – We have great venues across the capital. Be sure to check out the list of London leagues before registering to find a ultimate frisbee club near you.

5 Individuals welcome – Can’t find a ultimate frisbee team to play with? Not a problem – just join us as an individual and we’ll find a team for you. All of our ultimate frisbee leagues are friendly and fun so you’ll fit right in!

7 Beginners welcome – Haven’t played ultimate frisbee before? Its okay, beginners are always welcome! Unlike other ultimate frisbee clubs in London we don’t expect you to have played before or even know the rules of ultimate frisbee to join our leagues. Just read up on the basics before you come and our friendly, professional umpires will help you understand the game!

8 Great prizes- We give out prizes! If your ultimate frisbee team wins any of our London leagues, you’ll automatically win a prize.

9 Meet new people – Playing in one of our mixed ultimate frisbee leagues is a great way to meet new people around London. Although some games can get competitive, at the end of the day we’re all here to have fun after a long day of work!

10 Social events – Here at GO Mammoth, we’re all about having fun. Whether we’re on the ultimate frisbee pitch or at one of the mammoth sponsored bar events, everyone is always having a great time!