All the rules of volleyball, all in one handy guide! 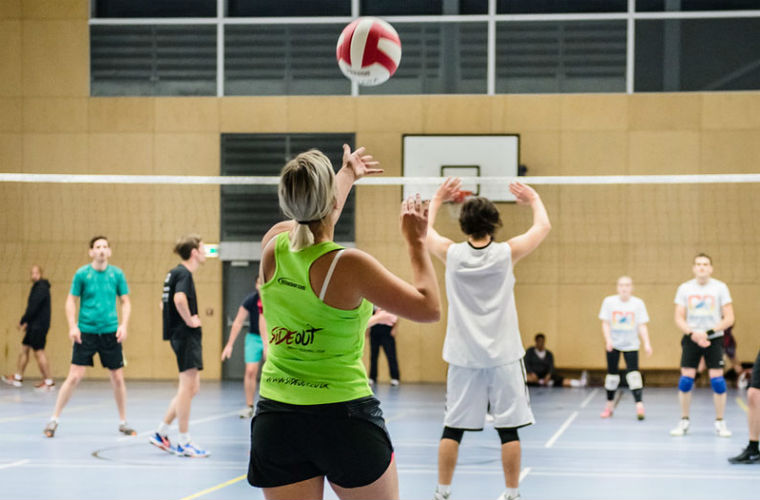 If you’re new to Volleyball or just want to brush up on your knowledge before entering our Volleyball London leagues, this is the article for you.

Teams will play 3 sets to 21 with a cap at 23 (40 min matches), or 3 sets to 25 with a cap at 27 (60 minute matches) using “All Rally Score” scoring. All Rally Score scoring means that every time a point is finished, one team will be awarded a point, whether they served or not. You must win by 2 clear points. The third set may be reduced in length (to 15 of 19 points) if the staff deems it necessary within the allotted time.

Six player teams must have a minimum two females on the court at all times. If a team has 5 players (minimum of 2 women) or 4 players (minimum of 1 woman) it will be considered a legal game. Teams with less than six players may have to adhere to the ghost rule (see below). For the 6’s league only the opposing captain has the option of instilling the Ghost Rule: In 6’s, if a team has 5 players for example, they must forfeit their serve after every 5th rotation. This will allow the team with a full squad to serve back-to-back.

If you know in advance that your team is going to forfeit a game, we encourage you to call our office so as to help us schedule your opponent a game; however this does not mean that your team will not receive the loss as a forfeit. If a team repeatedly forfeit, staff reserve the right to remove that team from the playoffs.

A team needs a minimum of 4 regular players in order to avoid a forfeit. A team with 3 players or less can be forced to forfeit at the choice of their opposition. A team with 4 players can pick up additional players during group stages of the season in order to avoid a forfeit and play a competitive game providing they field the minimum number of females.

Teams have until ten minutes past the designated start time to field a full squad. If at that time one team is unable to field a squad (minimum number of players required according to the rules), it will be up to the staff and the opposing captain to determine what is allowable. In the 6’s league the full team could also have the opposing team play with the ghost rule if they so choose (see above).

A referee will be in position for each game. The referee’s decision is final; any player that argues with the referee or shows poor sportsmanship may be removed from the match or the league.

A team earns service possession for the start of the first game by winning a coin toss or a Rock/Paper/Scissors. The teams will then alternate service every other game.

During sixes team members must rotate on the court and must remain in that position until the serve has been contacted. The player in the back right hand corner of the rotation will be designated to serve and continue to rotate clockwise.

THREE CONTACTS – Each team is allowed a maximum of 3 successive contacts of the ball in order to return the ball to the opponent’s area. (Exception: In the action of blocking an attacking ball, the touch, or contact resulting from the block attempt does not constitute one of the three successive contacts.)

ATTACKING THE NET– In six’s only the three players that are in the front row of the rotation are allowed to attack the net. Violation of this rule would include any hitting or blocking that occurs above the plane of the net.

When two opponents simultaneously and instantaneously contact the ball over the net, the ball remains in play and the team receiving the ball is entitled to another three hits. If such a ball lands, it is the fault of the team on the opposite side of the net from where the ball lands.

CHARACTERISTICS OF THE CONTACT – The ball can contact any number of body parts down to, and including the foot, providing such contacts are simultaneous and the ball rebounds immediately and cleanly after such contact.

HELD BALL – The ball must be contacted cleanly and not held, lifted, pushed, caught, carried or thrown. The ball cannot roll or come to rest on any part of a player’s body. It can rebound in any direction.

HAND SETS – A contact of the ball using the fingers of one or two hands to direct the ball toward a teammate is a set. The ball must come into contact with both hands simultaneously and leave both hands simultaneously to avoid a double hit call. A player may set the ball over the net in front or behind them only in the direction in which their shoulders are squarely facing. Rotation of the ball after the set may indicate a held ball or multiple contacts during the set but in itself is not a fault.

ATTACKING THE BALL OVER THE OPPONENTS COURT- A player is not allowed to attack the ball on the opposite side of the net. If the ball is hit above the spiker’s side of the net and then the follow-through causes the spiker’s hand and arm to cross the net without contacting an opponent or the net, the action does not constitute a fault.

SERVICE – Serves that hit the net and go over the net to the opponents side will be “live” and are deemed good serves provided they are played by the opposing team or they land in bounds. It is legal to set the serve.

BLOCKING – Blocking is the action close to the net which intercepts the ball coming from the opponents’ side by making contact with the ball before, during or after it crosses the net.

PARTICIPATION AFTER A BLOCK – Any player participating in a block shall have the right to make the next contact, such contact counting as the first of three hits allowed the team.

BLOCKING A SERVE – Blocking or attacking a serve is prohibited.

BLOCKING A BALL ACROSS THE NET – Blocking of the ball across the net above the opponent’s court shall be legal provided that such a block is:

(1) After a player of the attacking team has spiked the ball, or, in the referee’s judgment, intentionally directed the ball into the opponent’s court, or has exhausted their third allowable hit.

(2) After the opponents have hit the ball in such a manner that the ball would clearly cross the net if not touched by a player, provided no member of the attacking team is in a position to make a legal play on the ball

(3) If the ball is falling near the net and no member of the attacking team could reasonably make a play on the ball.

PLAY AT THE NET

PLAYER CONTACT WITH THE NET – No part of the body may touch the net at anytime unless a ball or person driven into the net causes the contact. Player contact with the net in a manner not directly relating to or affecting the course of play is not a violation. Contact with hair or part of the uniform will not be considered a fault.

SIMULTANEOUS CONTACT BY OPPONENTS – If opponents contact the net simultaneously, it shall constitute a double fault and the point shall be played over.

INTERFERENCE – A player may touch but not completely cross over the centre line with his/her foot.

All eligible teams make the playoffs (teams that have not abused any policies are eligible). In certain situations teams at or near the bottom of the standings may not advance to the playoffs. Check with Go Mammoth league coordinator to see if this applies to your league.

Teams may play more than one match per day in the play-offs.

If a team does not have a full squad (minimum number of players required according to the rules) by ten minutes past the designated start time, they will forfeit the first set of the match. At twenty minutes after the start time the match is forfeited (per staff and opposing team’s captain request).

Any questions regarding policies, rules, eligibility or forfeits must be addressed before the start of the match.

In order to participate in the league, each participant must sign the team waiver. Waivers are provided and must be completed and handed in no later than the first night of play. Players not present the first week of play will still be required to sign a waiver with our staff before participating.

The idea of Go Mammoth is to have fun. We hope that all participants keep that in mind when becoming involved. Although the games may become intense, you still can be competitive while maintaining good sportsmanship. With this said, any behaviour deemed unacceptable by staff may result in suspension and/or ejection from a game or the league.

Our referees and staff are present to coordinate and run the league and will be available at all times if you have questions regarding schedules, policies, rule interpretations, sponsor bar directions, etc. Please ask! 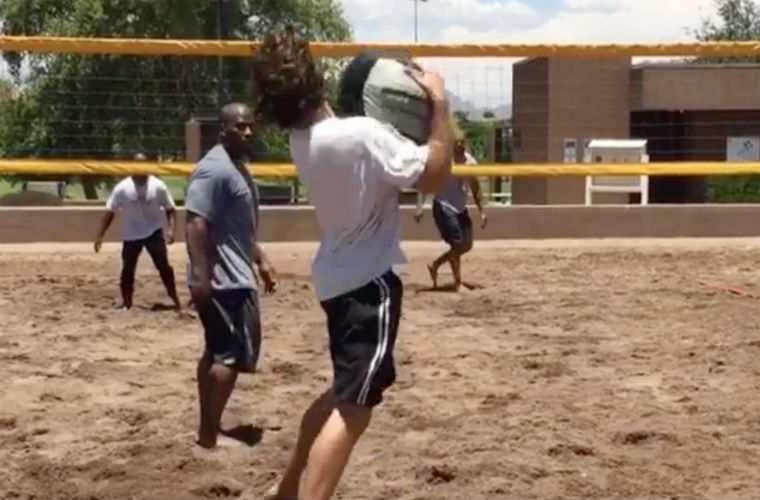 The most intense game of volleyball of all time? 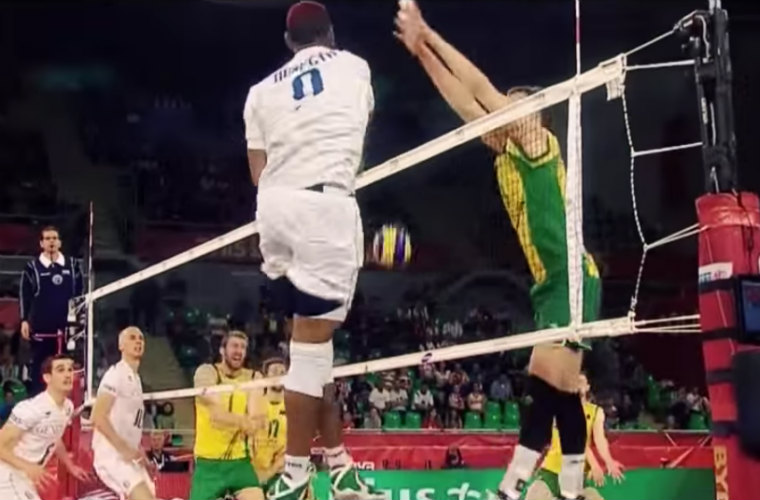